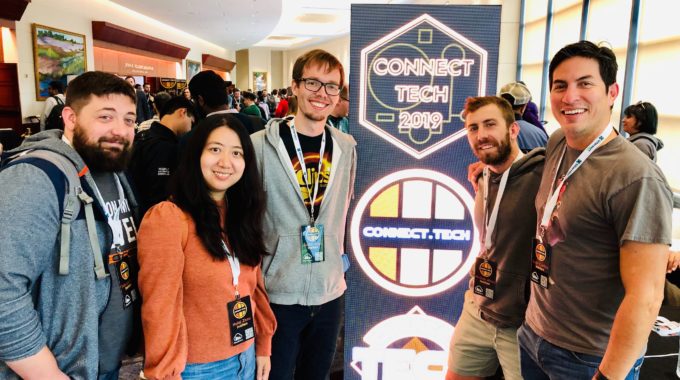 Connect.Tech is one of the most talked-about conferences in the country. Web and mobile developers come from all over to network with other developers, learn about new technology and best practices, and participate in workshops designed to help them expand their skill sets. And since we’re all about learning here at Insiten, we sent five lucky developers to Connect.Tech.

To make the most of their time at Connect.Tech, our developers split up and attended several workshops. At the End-to-End Testing Workshop, our devs spent a full day learning and practicing with Cypress, an open-source, easy-to-use integration test tool. The React Hooks Workshop showed our developers new best practices for coding components, and the Advanced Angular Workshop showed our devs new ways to create applications in Angular.

After an exciting day of hands-on learning, our developers explored the rest of the conference. They mingled with devs from other companies, attended talks, and learned about the latest and greatest in front-end development technology. Not content with just learning new things, our high-fivers also got together to discuss how they can use what they learned and discovered to improve the skill sets and processes we use at Insiten.

All in all, the conference was a massive success. Our team got to connect with other developers, learn new skills and tools, and pick the brains of some of the sharpest devs in the world. We can’t wait for them to put what they’ve learned into practice back here at Insiten.

To commemorate the company’s third birthday, the Insiten team celebrated with a day of fun…

Happy 2019! Insiten is proud of the extraordinary accomplishments we have achieved in our first…

We know Huiqi Zhou is a super-fast software developer, but now we know she has…